The Simulink/Stateflow code generation process for model references is different from that of non-model reference code. The follow briefly describes how to use capabilities in T-VEC Tester for Simulink and Stateflow 4.1.0.

The typical processes include:

However, there is a special schema for LDRA:

Place this in the Advance Translation Options, as shown in the following image. 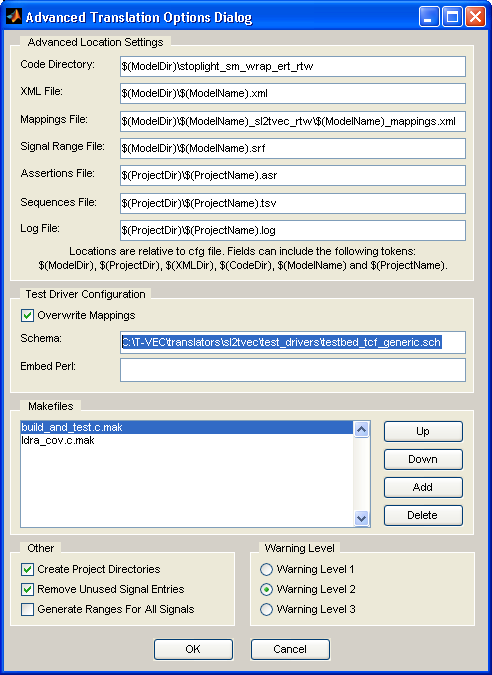 The typical location where code is generated for a model reference is reflected by the following figure. 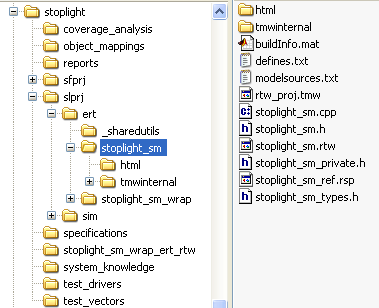 The names extracted from the exported model information do not necessarily correspond to the names produced by the code generator. There is a tool provided with the release called

An easy way to use the program is to put it in the c:\t-vec\bin directory. This is usually defined as one of your path variables. Then use the VGS Toolbox under Tools | Toolbox and set up as shown below: 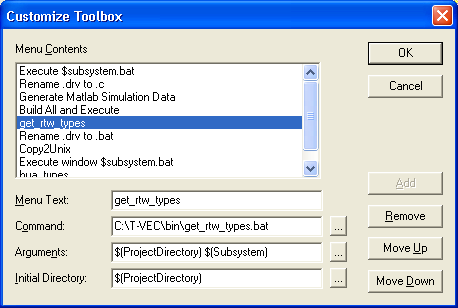 Simply select the subsystem from the VGS Project window and then execute the get_rtw_types from the Tools menu. It will update the object mappings for the subsystem selected and for all its dependencies. 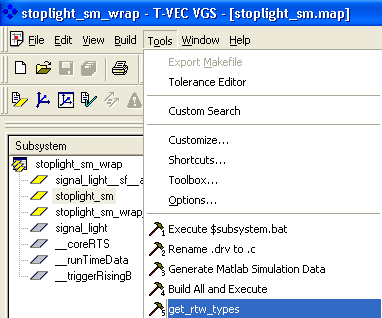 What the get_rtw_types program does

This is a perl program that takes two parameters:

It also performs further analysis of the code generated for model references. Normally when there are input scalar variables in a model, the code that is produced looks like the following:

The variable rtu_0 and rtu_1 are scalar inputs. These default situations are handle properly by the sl2tvec translator. However, for unknown reasons, the code is sometimes produced as follows:

In such situation there are changes required in the sections called:

Similarly, corresponding entries must be made to the parameter pointer initialization as shown below:

Finally, the updated version of the program updates the following 7 variables to the other dependent object mappings files. These dependent files are defined in the user defined variable:

Note, for example, that signal_light__sf__a is a subsystem related to the user model, but __triggerFallingB is a utility subsystem generated by the translator. It will not have a .map file.

The updated version of the program replaces the values of the following variables if they exist with the value from the object mapping subsystem from which it was called.

If any of these variable do not exist, one is added just before the following line:

The referenced schema produces a .tcf file in the test_drivers directory. If the particular subsystem is related to a state chart, then those dependent subsystems are include in the parent's .tcf file. This allows one file to be executed for verification of test coverage. The reference to a dependent subsystem is defined by the user-defined variable dependencies as shown in the following example.

The LDRA tool provides a significant number of features. This description provides the following minimal steps to execute the generated LDRA script .tcf file against the generated code.

In the LDRA Testbed tool use the menu

Select the auto-generated code file that is the target of the test.

This is where the generated .tcf file is loaded into TBrun. If you copied the .tcf file to the code directory. Load that .tcf file as the test sequence. Otherwise load it from the test drivers directory where it was produced by VGS.

Execute the Run Drivers command or execute the commands separately:

Note: during the Generate Driver process, you might see the following LDRA Question

It is not uncommon to need some pre includes or post includes. Make sure that the files included are the correct ones and that the sysearch.dat file and sysppvar.dat file have all the information required.