There are many types of models and modeling notations. The support T-VEC tools provide include functional Requirement Models, Design Models, and Hybrid Models. 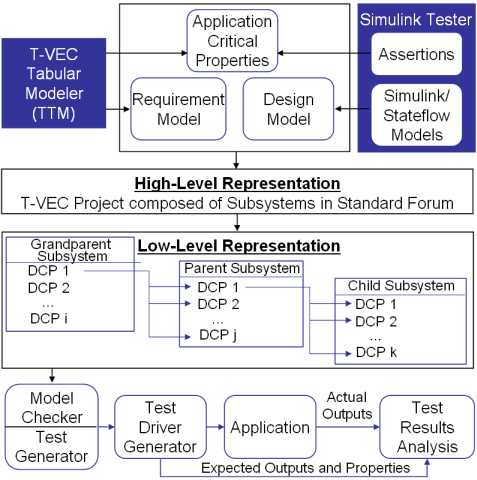 The translators for both TTM and SL2TVEC perform model transformations based on translation options that result in a high-level representation called a T-VEC project that is composed of T-VEC subsystems. The subsystem language is called the T-VEC standard form. It is a textual (ASCII) language. Simplistically stated, each subsystem has one or more Functional Relationships (FRs) each associated with one or more Disjunctions (constraints). During the Build process, the T-VEC compiler converts this language into a low-level representation. The subsystems are derived from the modeling constructs of TTM (e.g., condition tables) and Simulink subsystems.

At the lowest-level of representation there are Domain Convergence Paths (DCPs) that are conjunctions of predicates, each associated with a functional relationship (FR) that is also treated as a predicate. Sets of DCPs retain their grouping within the subsystems of the higher-level representation. A DCP can represent a simple precondition/postcondition relationship, but the DCP can represent a complex relationship over time. This supports the ability to generate Test Sequence Vectors.

The test vector generator performs model checking on a DCP at each level in the hierarchy during test vector generation, and T-VEC VGS creates reports identifying the defects. A simple example of a model defect is a logical contradiction, where a constraint such as:

is in the DCP specification. Model checking hierarchically composed subsystems involves checking the satisfiability of constraint or function references between higher-level (i.e., grandparent) and lower-level (i.e., child) subsystems. For example, as conceptually shown the figure, if there is a constraint, x > 0 in a DCP thread from the grandparent subsystem to a child subsystem, there must be at least one DCP through the parent and child that permits x > 0. If such a constraint in the grandparent cannot be satisfied, then the input space for that DCP of the grandparent is empty (i.e., null), and no test inputs can be selected; this is a model defect. Coverage reports link to detailed error reports that link a DCP problem through the subsystem standard form to the TTM or Simulink model.

If the DCPs are error free, VGS produces as a byproduct a test vector. The tools integrate with a test driver generator to produce test drivers that automate test execution for most any language and test environment with automated test results analysis.